Just because it’s almost August doesn’t mean spring is over, not in the housing market, anyway.

Spring in housing was late this year for a number of reasons and the kind of housing market we associate with springtime is, to a great extent, still going on.  Many of us in the profession have sensed a shift in the market lately, perhaps a slight quieting, but, overall, as the following stats show, spring has still sprung.

The following charts show where we are and where we’ve been from 2014 to the present in suburban Essex County. Click on the chart to see a larger image: 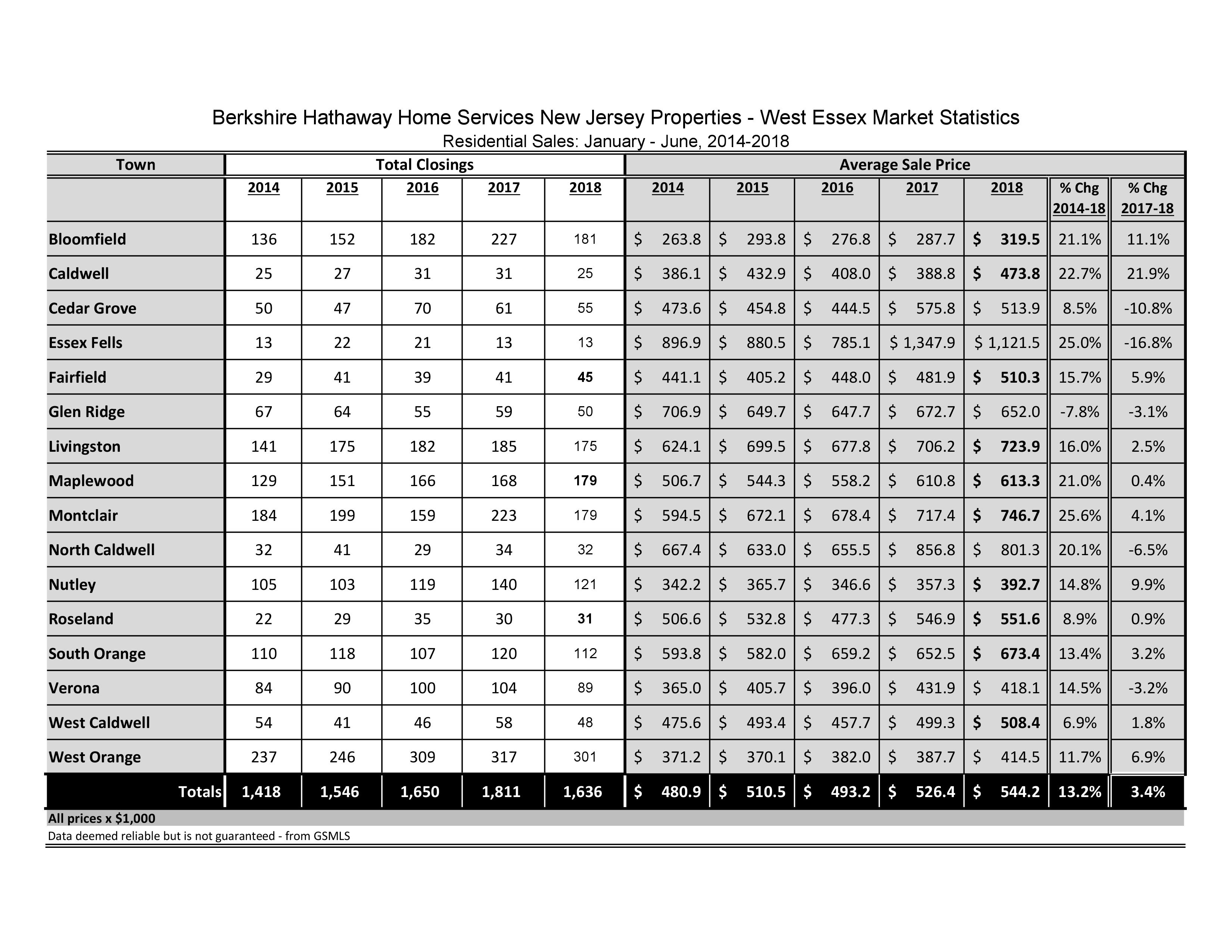 Here we see January to June closings for the past 4 years and this year to date (white columns) and the average sales prices and price summaries (gray columns).

The number of closings is generally up from 2014 which is an indication of more robust home sales coming out of the recession.  Bear in mind that 2017 was the best year ever in terms of number of sales.  Closing numbers have generally kept pace with the past, slipping slightly in 2018 because of a lack of inventory.

The other half of the chart shows that prices have risen, predictably, mostly in double digits since 2014 and the emergence from the recession.  An interesting outlier is Glen Ridge where prices have actually fallen almost 8% since 2014.  Adjusting for the fact that these stats are averages, it doesn’t mean Glen Ridge is sinking.  You’ll see in a minute that what sellers are getting is robust vs. what they ask.  Also, keep in mind Glen Ridge only has a population of about 9,000.  It’s astounding it’s been the Essex County powerhouse in recent years despite its small size.

A few towns have actually have seen this year’s year-to-date prices slip below 2017, most notably Cedar Grove and Essex Fells.  In the rest of the County the difference between this year and 2017 is all over the place, with some towns’ prices falling, some rising slightly, some rising at or near the predicted 6% benchmark, some staying the same and a couple rising dramatically.  It’s difficult to perceive a trend here, given these differences.  The logical conclusion is that different towns hold different attractions plus the fact that there are different price points within certain towns and those market segments are performing differently from other price points.  The County average is up a respectable 3.4% overall and the overall average closings are up as well. 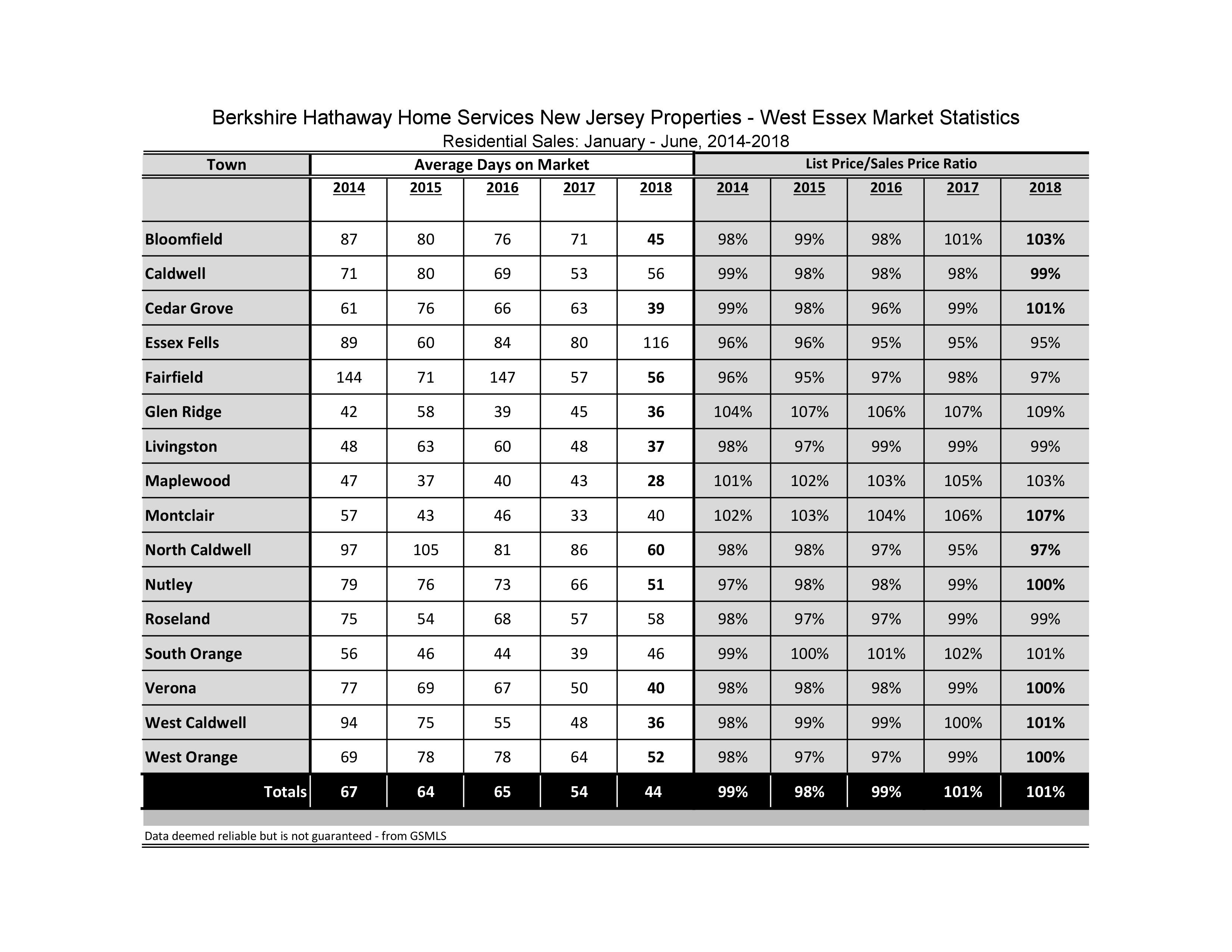 Now we see the average days on market which, with a couple of exceptions, is down dramatically.  This is evidently a function of the robust market coming out of the recession.  There is generally a decrease year over year in most towns.

The List Price/Sales Price Ratio in the gray columns is the most instructive in appraising the market over the past 5 years.  The towns that don’t have triple digit ratios are the towns with the most luxury inventory and are not “train towns”.  Everywhere else in the County shows increased demand reflected in sellers getting what they ask or more. 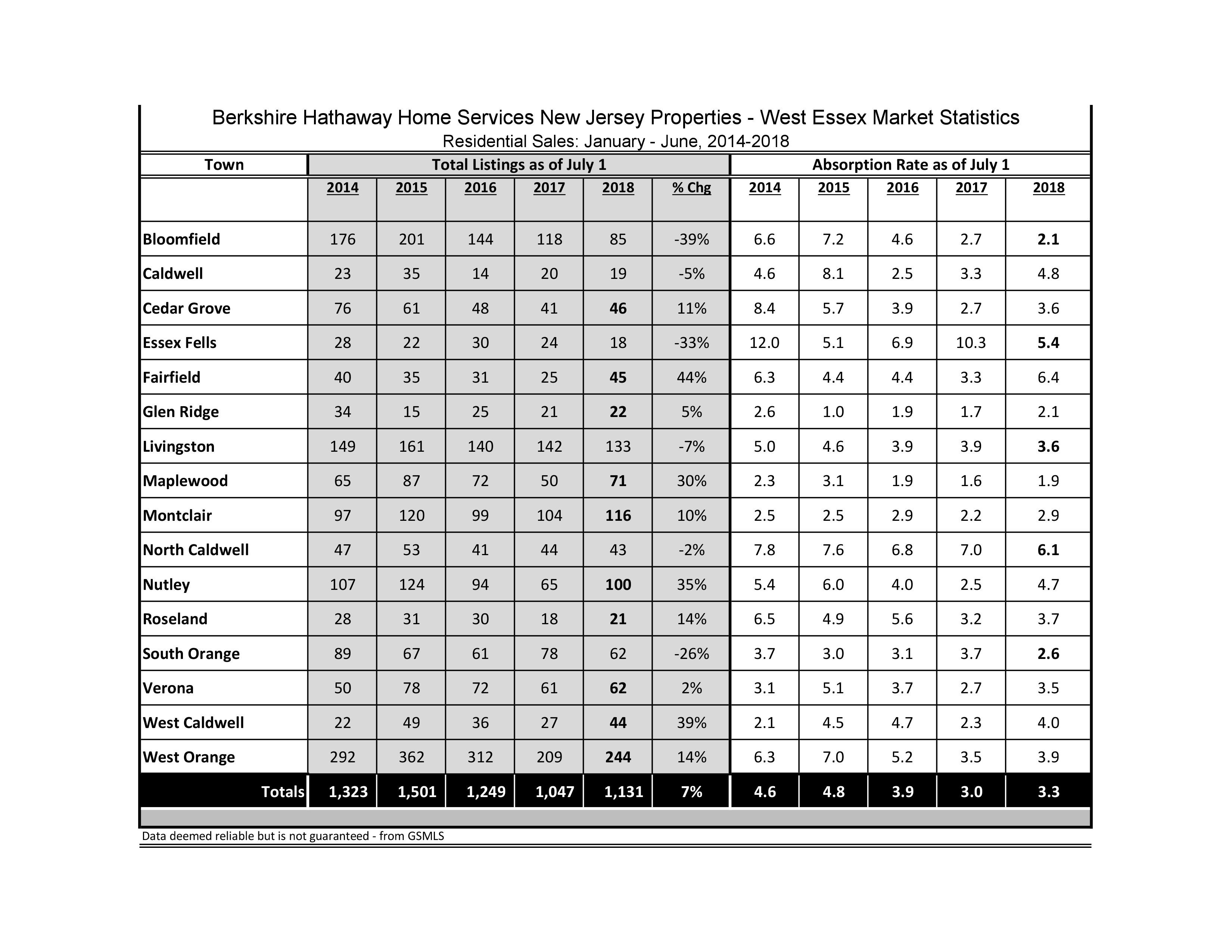 The total listings reflected in gray show a general rise in listings as the market improved tempered by a lack of inventory as the market gained steam.  Overall, listings are up by 7% but some towns are showing a decrease from 2014 to the present.

The absorption rates (the amount of time it takes the market to sell what’s on the market, represented in months) are now, overall, significantly less than 2014. The real striking difference becomes clear if you remember that absorption rates before 2014 were significantly, dramatically, higher.  It’s no surprise that the market is absorbing inventory faster in a more robust market.

These figures represent what I call an “Robust Normal” market.  We have achieved normal growth while experiencing good levels of activity.  The anomalous market of 1996-2006 where growth was unnaturally high and the recessionary market of the years after the crash have evened out and returned to what has been a normal standard in long-term history.

The numbers that show the continued growth belie the concept of seasons as the market rolls on past the daffodils of spring and into the high grass of summer despite a pause here and there.  Some rising interest rates coupled with home price increases have created an affordability gap in some markets where the price of home ownership rises faster than buyers’ ability to afford the increases.  This would account for some of the sluggishness during some periods of this year in some townships, but not all.