At the end of March I attended the Spring Housing Workshop hosted by Jeffrey Otteau of the Otteau Group, Inc.  Mr. Otteau is generally recognized as one of the foremost authorities on New Jersey real estate.  His seminars are always packed with facts which support his conclusions.  Looking back on his prior predictions, he is invariably correct.

Mr. Otteau was as bullish about the New Jersey housing market as he has been since the real estate boom more than 10 years ago.  It’s been 10 years of recovery since the Great Recession and the US economy has enjoyed the 2nd longest growth period on record in the last 9 years.  Current annual economic growth is 2.9% and the national average of unemployment is 4.1%.  New Jersey’s unemployment rate is now 4.7% with an estimated 99,000 jobs being created in NJ in 2018.

We are a “book-end” state with our jobs market heavily dependent on the trends in New York City and Philadelphia and our employment figures will rise and fall in proportion to the trends there. 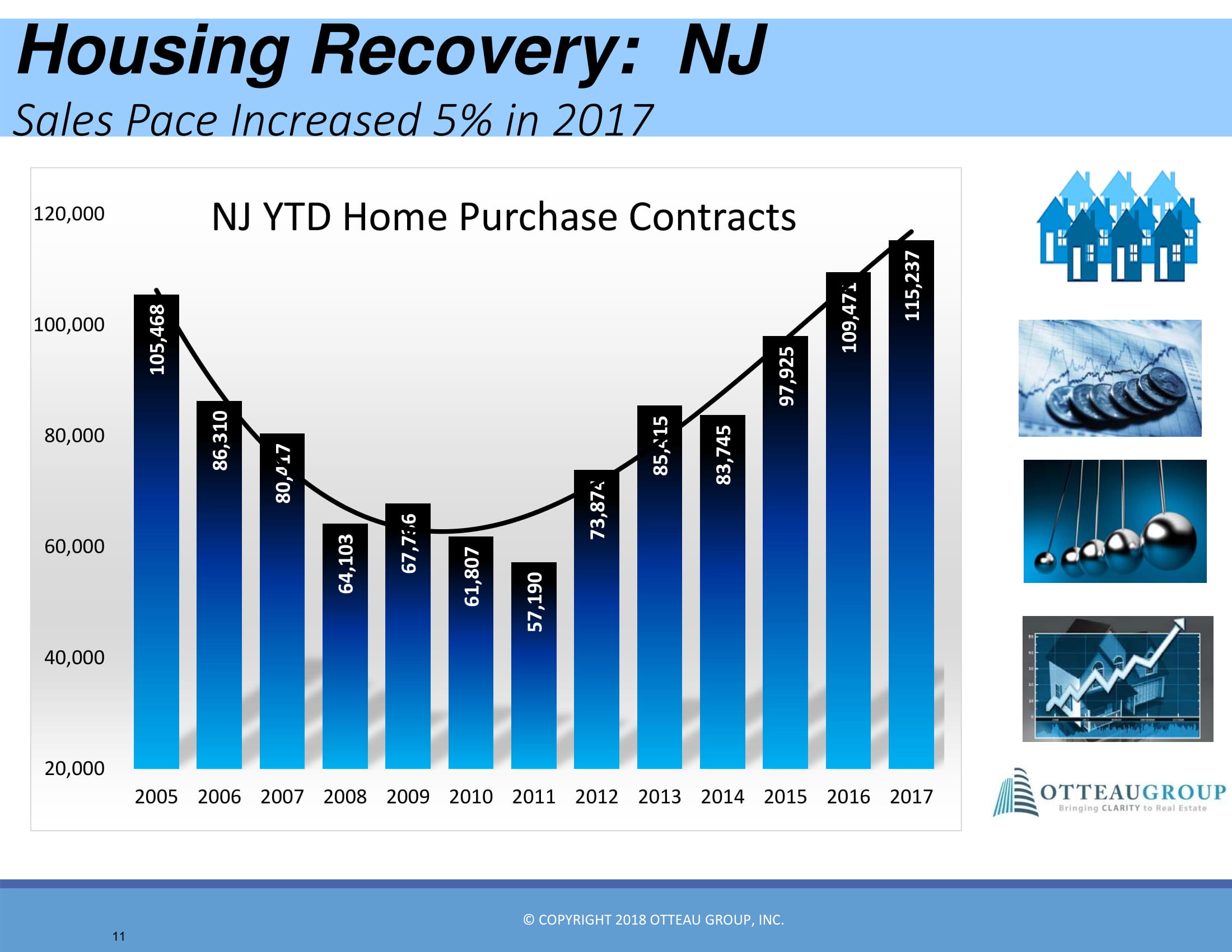 The graph above shows the housing sales volume in 2017 of purchase contracts from 2005 to 2017.  That period of time is used since 2005 was the peak of the boom years (the decline started in 2006 and bottomed out with the recession).  The peak of the boom in 2005 was fueled by the sub prime mortgage market which eventually exploded.  You will notice that 2017 outstripped 2005 and that was done without a sub prime mortgage market.

The numbers of housing unit contracts in New Jersey is surging but the prices of homes have not completely recovered in New Jersey. 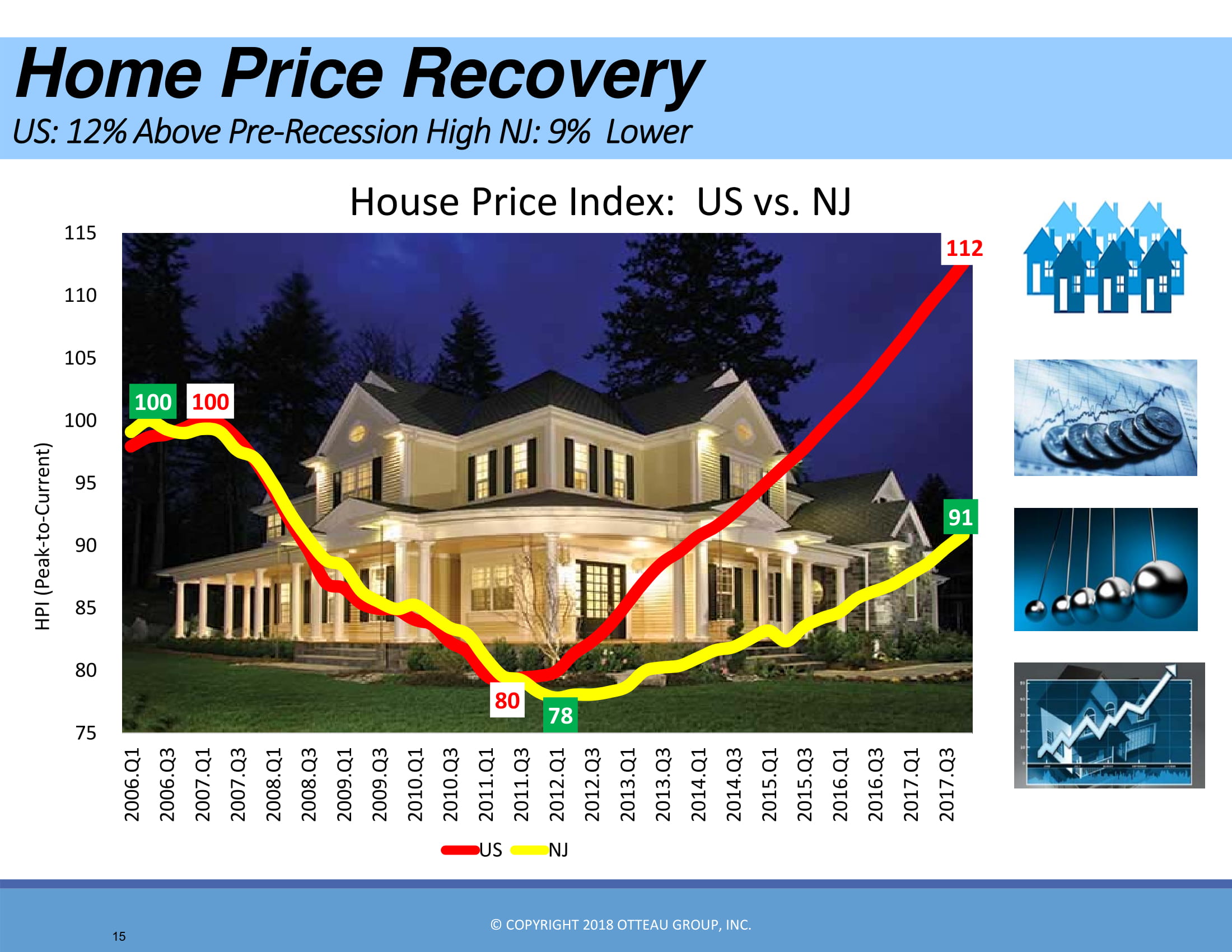 This graph shows that New Jersey is 21 points below the national average in price recovery.  The US has recovered 112% of housing prices since the end of the recession while New Jersey has recovered only 91%.  The reasons for this are the same as the challenges New Jersey faces with high taxes, restrictive zoning and a lack of new residential construction.  Single family building permits were at a low of about 10,000 filings in 2017, compared to 22,000 filings in 2005.

That’s also a factor in the current lack of inventory.  We brought this on ourselves by electing officials who opposed “sprawl” and imposed more and more restrictions on housing starts through zoning laws.  Additionally, when there’s a lack of new construction sellers don’t move out of their older homes and move into the new, therefore reducing the number of older homes on the market.  Other factors include more seniors aging in place and younger buyers being “zoned” or priced out of the market. 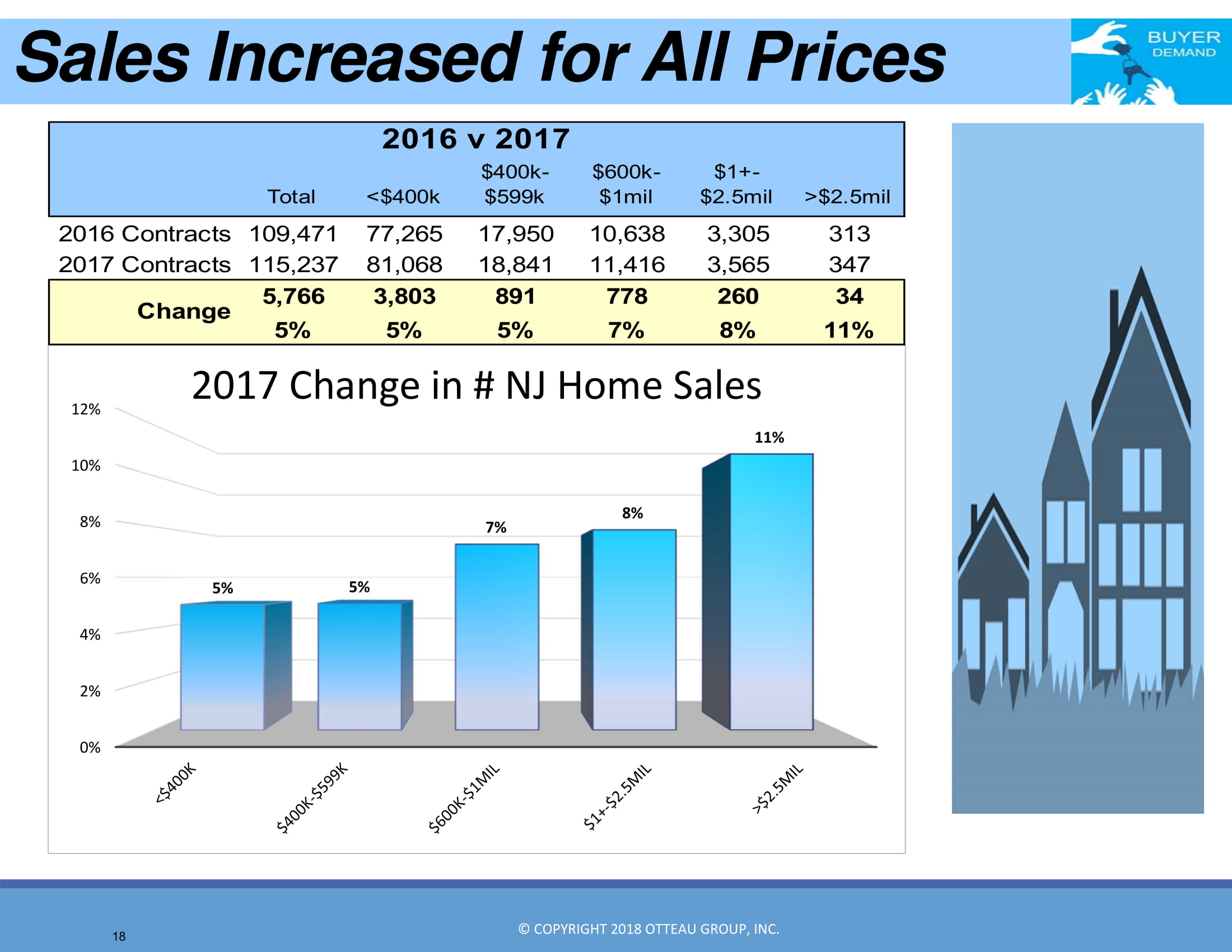 Notice on the above graph that NJ sales are rebounding and volume is increasing differently by price point.  The higher the price point the higher the volume increase and the lower the number of increased units sold from 2016 to 2017.  The over 2.5 million segment shows a hefty 11% unit increase but that only reflects an additional 34 units in 2017 over 2016.  Unsold inventory also increases as the price point increases.  Also, numbers of buyers per 100 sellers decreases as the prices increase.

Prices in New Jersey were up 4.6% on average, statewide in 2017.  In the first 2 months of 2018 the number of pending contracts was the highest its ever been. 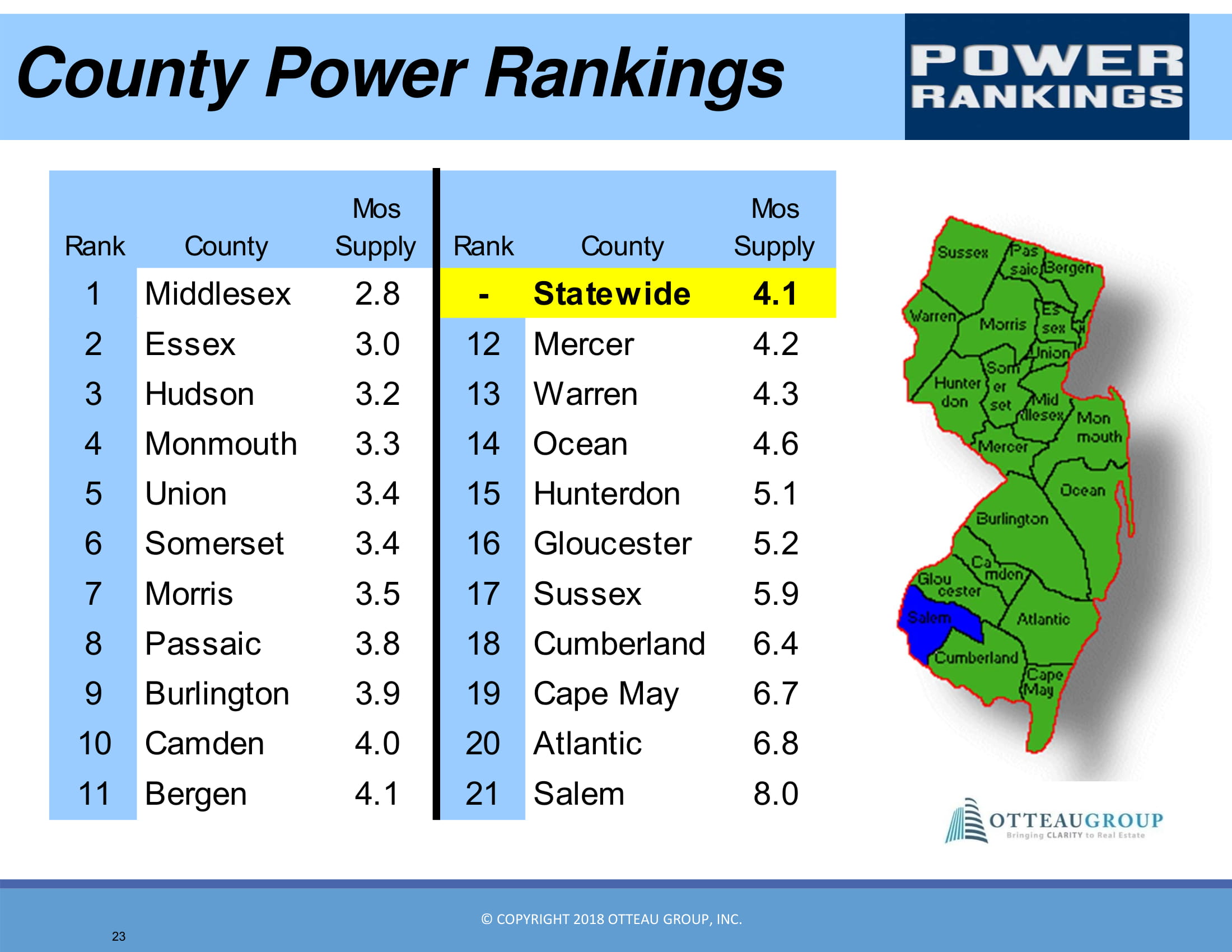 This chart shows the absorption rate by county.  This is the number of months it will take to sell what’s on the market.  Notice that Essex County is one of the fastest.  The number for western Essex, minus the more urban eastern Essex cities and townships, is even lower with many townships like Montclair, Glen Ridge and Maplewood under 2 months of supply.  If you’ve followed this blog in the past you will notice the difference from past Otteau absorption rate charts.  Now almost the entire state is “in the green” which are the lowest months of supply as opposed to past charts showing trends of longer months supply.  The southern counties are bulging with supply reflecting weaker markets since the collapse of Atlantic City and the aftermath of Superstorm Sandy. 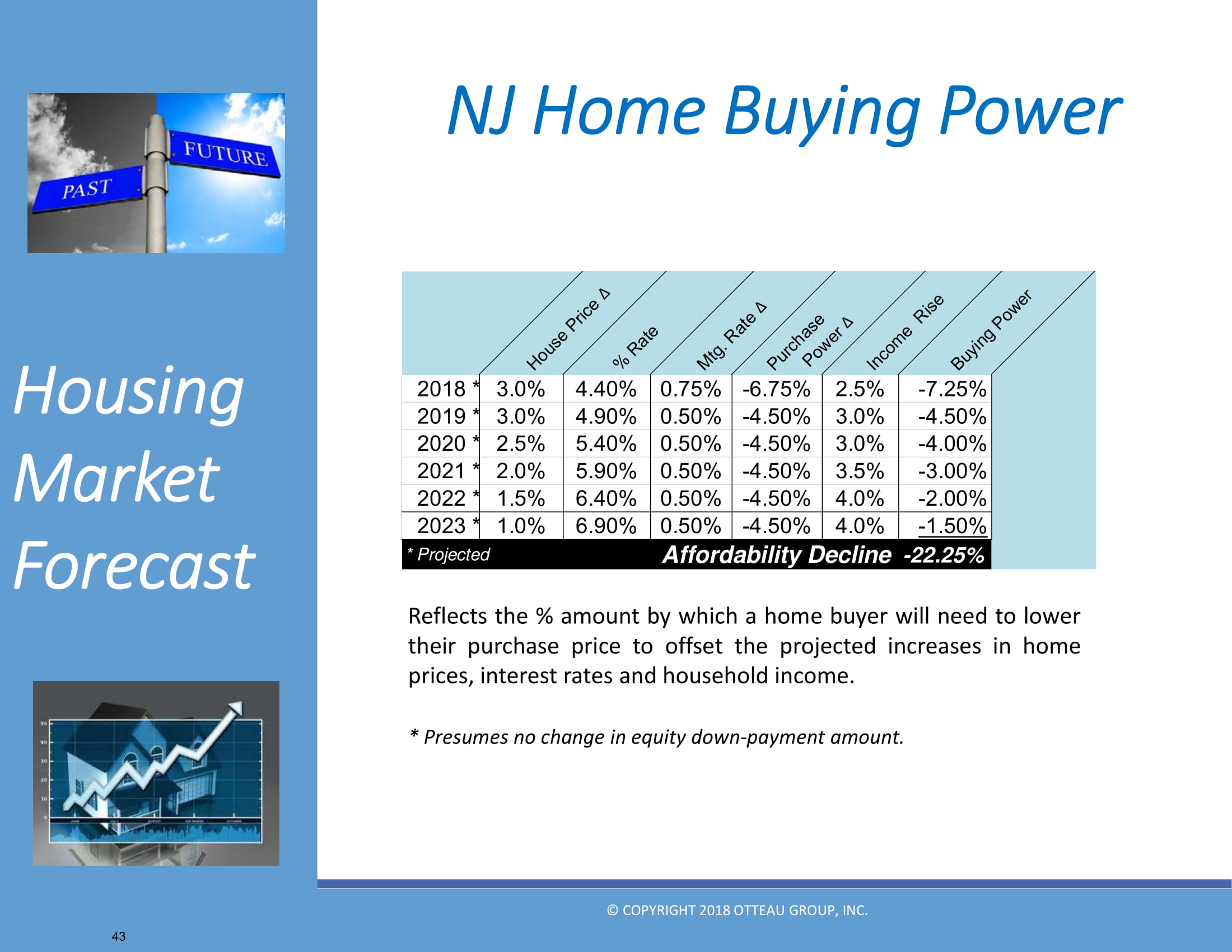 By 2023 a NJ buyer will have, alarmingly, 22.5% less buying power than the current year because of mortgage interest rate increases, price increases and other economic factors.  The lesson to be learned here, according to Mr. Otteau, is DON’T WAIT!  Buyers need to act before their decreased buying power forces them into smaller, less desirable houses or ejects them out of the market altogether.  Sellers, also, should not sit on their hands if there is a desire to sell.  The longer a seller waits to get a home on the market, the less buyers there will be for that home based on the factors above.

These challenges are intertwined with all of the positive trends in the NJ housing market and some of the challenges are the result of the bull market and the improving economy.  As I mentioned earlier, Mr. Otteau was very positive on the housing outlook for the foreseeable future as the housing recovery picks up steam.  We have been in recovery for 10 long years, are now in a robust but normally expanding market in the midst of a strong economic recovery.  Opportunities and challenges exist side-by-side.