Tax Reform and the Housing Market

I recently attended a seminar by Jeffrey Otteau who is generally acknowledged as a principal authority on New Jersey real estate.  His company, Otteau Group Inc., holds seasonal seminars on the state of the Jersey housing market.  Mr. Otteau decided to research the details of the recent tax reform law to see its effect on the housing market and this seminar was the result of his investigation using the research capabilities of his company.

Mr. Otteau’s aim was not political.  I don’t know his political opinions and he took great pains to say that the facts will speak for themselves without embellishments based on ideology.

Otteau comments that a failure by Republican proponents to provide clarity on how the plan would affect taxpayers created an information vacuum that was shamefully filled with hysteria and a distortion of the facts by Democratic opponents.  He started by discussing the facts of the reform: 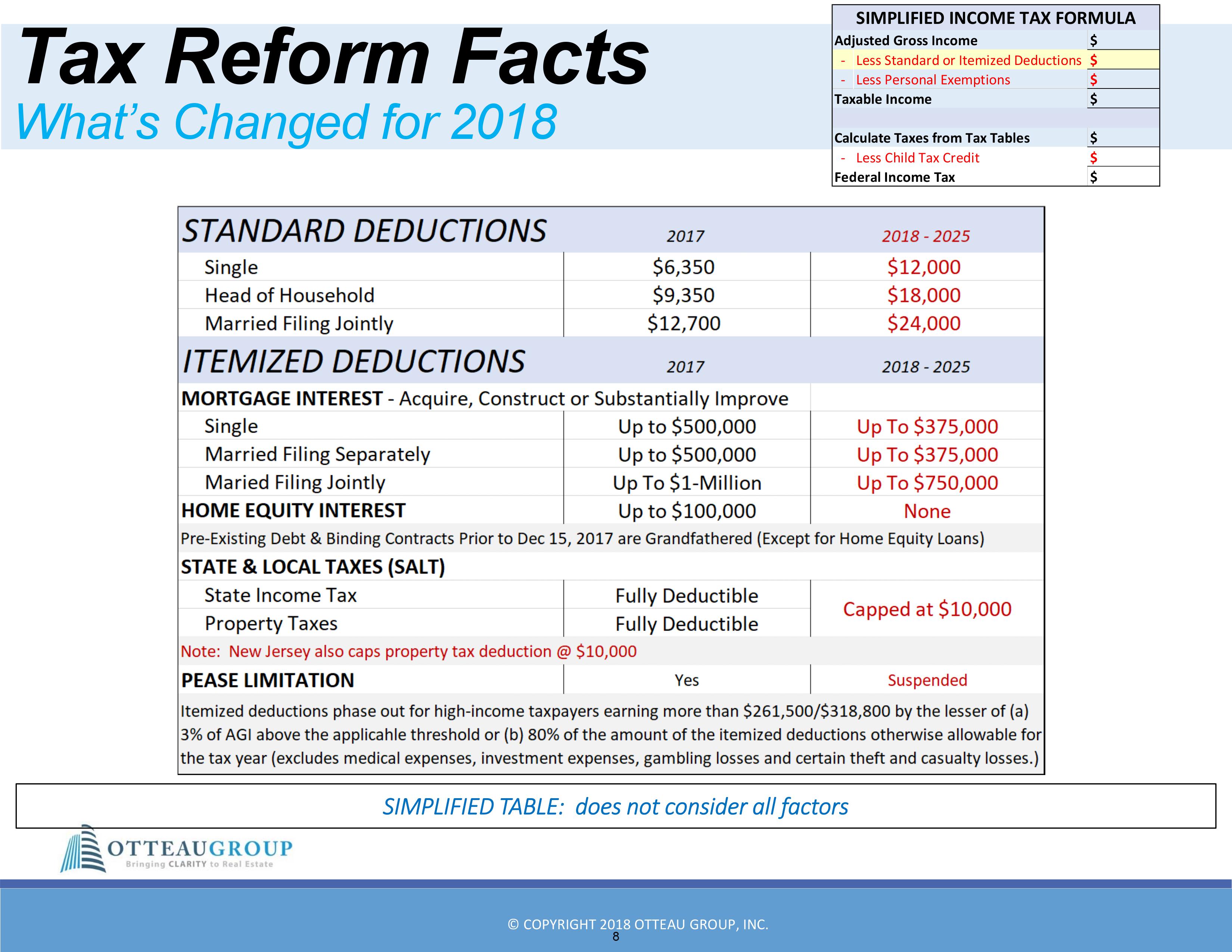 As you can see above, the standard deduction has doubled, the mortgage interest deduction has a lower threshold and the state and local taxes (your property taxes and state income taxes) are deductible up to $10,000 combined.  Personal exemptions have been suspended until 2025, the child credit has been doubled and the estate tax exemption threshold has been doubled as well.  Tax rates for most incomes have been lowered.

Mr. Otteau went on to show the tax rates for various incomes of single taxpayers and married couples with and without children:

Right away a couple of issues stand out from these two charts.  If you owned a home before 12/15/17 your mortgage interest deduction is calculated by the old rules, not the new.  This has not been generally reported in the media.  Most of the people I’ve spoken to are not aware of this concession to existing homeowners.

Secondly, the tax table above shows that higher income taxpayers are paying more (or the same) in taxes, not less, and the taxpayers with lower incomes are, indeed, paying less.  That’s quite the opposite of what’s been said about this reform.

Let me say at this point that I am not making any political points either.  However, it was an eye opener to me to see the facts against the perceptions in the court of public opinion.

So, the question is: how much of a catastrophe is this new law?

Mr. Otteau made the point that the dream of home ownership is driven by more than taxes and tax deductions.  I’ve been saying this ever since I started selling homes in Essex County.  Buyers know what they’re buying into in this area.  Taxes are no bargain and they drive the quality of life which is the point of being here.

The seminar discussed the fact that whatever debits are increased by reform may be offset by larger deductions and lower tax rates.  Ongoing improvement in the economy will continue to drive the strength of home sales, especially in desirable housing markets.

The spring housing market may slow slightly until the facts of the reform are fully understood.  In the meantime, as a result of confusion, fear, political opportunism (on both sides) and faulty reporting, the inventory in the market is predicted to loosen up a bit but there is no wholesale slide in prices predicted on the horizon.  Time on the market may increase but Mr. Otteau says that once the facts are widely known that will re-invigorate the market and offset any dip in numbers of sales.

One of the basic facts that came out of this gathering was that tax reform may not hurt New Jersey as much as feared, but it may put us further away from where we need to be. That distance is a function of the state’s ongoing problems of out-migration (business and people), high state taxes, high levels of regulation, etc.  These are core challenges that New Jersey needs to address no matter the federal tax code.