Many people don’t know of him or remember him.  You had to be alive in the 1960’s.  You had to be more than a child then and been aware of what was happening in America at that time. 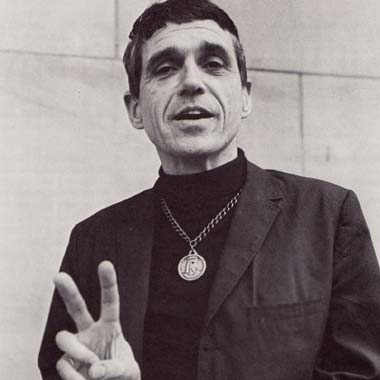 Daniel Berrigan in the 1960s

It’s not easy to describe the United States of the 60’s to someone who wasn’t there or was too young to remember.  The chaos of this year’s political campaigns pales in comparison to the real sense of dread that permeated the chaos of that formative decade in America’s maturation. Springing out of and spitting out the post-war complacency and affluence of the 1950’s, this period of time saw more concentrated, wrenching social change and challenge than this country had experienced before.

Berrigan was a one man protest juggernaut, a provacateur, an activist extrodinaire. He was a loud and omnipresent voice of dissent on the many and varied controversies of that decade and he (with his brother Philip, also a priest) mobilized a large following to his way of thinking.

In that decade there seemed to be a large protest, somewhere, everyday.  The catalog of 60s issues is daunting: Civil Rights and the violent reaction to the marches and protests, voting rights, Vietnam, the military draft, the Cold War, the arms race, the space race, the Women’s Movement, the birth of Medicare, Medicaid, Head Start, the sexual revolution, the counter-culture movement, violent cults, violent student protests and organizations, inner city riots, mass civil disobedience, militant groups of every denomination, assassinations and political upheaval especially around the 1964 Democratic Convention. The Democratic National Convention in Chicago of 1968 descended into violence in the streets as the underpinnings of our country seemed to be slipping.  Governors of several southern states stood in bald defiance to the Federal Government’s mandate of equality. Essentially the entire South, long a stronghold for the Democrats, abandoned Lyndon Johnson and the Democratic Party after the passage of the Civil Rights Act of 1964 and is reliably Republican to this day. George Wallace, a third-party, segregationist, populist, “outsider” candidate (sound familiar?) played on the fears and prejudices of the country and attempted to throw the 1968 election into the House of Representatives. The nascent polarization of the nation was sharpening as some older Americans tried to preserve a way of life that was fast fading and others, notably the young, railed against injustice and petitioned for change.  Today there are some still longing for the return to that 50s way of life but it’s no longer fading away – it’s gone and won’t be back.

Many of the cultural norms and tolerances we take for granted today were born in the fiery crucible of the 1960’s. These were difficult births, punctuated by violence, loss and grief:  John Kennedy, Bobby Kennedy, Martin Luther King, Jr., Medgar Evers, Malcolm X, the Sharon Tate murders, the Freedom Summer Murders, Fred Hampton, and countless African-Americans murdered in the dark of Southern nights, all killings concentrated in a period of just over 6 years. Today we mourn the victims of senseless shootings in the general population but from late 1962 to 1969 we were forced to confront the slaughter of not only innocents but prominent citizens, activists and the leaders who we looked to guide us through a turbulent time. The killers, then, were not fanatics with agendas born abroad, but Americans killing Americans as an expression of domestic distress. I was driving my car in June of 1968 when Bobby Kennedy’s assassination came on the radio. Martin Luther King Jr. had been killed just 2 months before.  I remember being so overwhelmed by the cumulative sense of loss and grief from so much violence that I had to pull over as I struggled with this news.  I remember those feelings as vividly, today, as I did on the side of the road on that sunny afternoon in 1968.

The year before, in the summer of 1967 I had a job with Coca Cola in south Newark, NJ.  The city exploded in riots soon thereafter and I remember looking out the window of my workplace and seeing a tank rumble by followed by heavily armed National Guardsmen.

Daniel Berrigan emerged in the 60s as the intellectual star of the Roman Catholic “new left” and believed that racism, poverty, militarism and capitalist greed were interconnected pieces of the same overall problem, an unjust society.  He raised his voice relentlessly in the 60s against these inequities and took his cause to the streets, disregarding his personal fortunes.  His views put him at odds with his superiors in the Church and his activities landed him in Federal prison, most notably for the burning of draft records in Cantonsville, Maryland in 1968.

Do some of the issues Berrigan protested sound familiar? They should.  They’re still with us, undiluted, down through the decades.

So what does this have to do  with real estate?  As you’ve probably gathered, I’ve had a long working life. As the decades roll by and the children need tuition and the mortgage needs paying, it’s easy to develop tunnel vision while we, as Jackson Browne says, “struggle for the legal tender”.  These days, looking out over the real estate industry I see many people in the business blindly obsessed with money.  I have railed in this blog in the past about “blind capitalism”, capitalism’s demented cousin where money crowds out any other feeling, instinct or ethic.  It may seem odd, this existential concern, coming from me.  I have often said that we are realtors not social workers. Don’t get me wrong, I still run a business and I’m in business to be in business. I enjoy making money. But Berrigan’s death snapped me back to a time when the woes of society seemed more front and center and urgent, more important than our day-to-day striving. When doing the right thing was not compromised by money. I don’t see the same urgency today. We’ve fought 2 major wars in the last decade with feeble, at best, protests against them.

Maybe it’s advancing age (or advancing dementia) but, lately, I have taken on some hard cases where the money became secondary to my concern for the people involved who were struggling. These are small gestures on my part, only a chink in an armor of complacency.

Daniel Berrigan was the quintessential example of a “citizen of the world”, a person who cannot go on as usual in the face of injustice.  His determined (maybe, even obsessive) focus distinguished his life.  He was penniless, no comfortable 401K tucked away like many other clergy. He wore the same clothes his entire life and just about everything he owned fit into a small backpack he took everywhere. Serious souls like him shine a light on the issues that concern us all and the ethic we are all judged by.

For the rest of us, it is tricky to satisfy our obligations and be pro-active in society. I certainly don’t hold myself up as an example of the proper balance.  Maybe, however, a keener awareness (like in the 60s) of the larger culture can begin to add fulfillment to an otherwise busy life.  Not to be blinded by money is a start and a touchstone for every situation.  There’s a palpable anger in the population today and it needs to be channeled into awareness and not pandered to by demagogues with false promises based on fear.  Anger is not a solution, it’s not even a good beginning.

There is another path, beyond making money, serving our comfortably affluent clients and giving to charity. It requires being a citizen of the culture and not just a practitioner of real estate. Those of us in real estate, like everyone else, will inherit the kind of society we deserve and wrestle with the kind of issues and inequity we create by our action or inaction. Daniel Berrigan lived to see 2016 and I’m sure he still felt the weight of the work we need to do, the wrongs we still need to right and the personal progress we still need to make.