I follow the monthly residential and multi-family values of the housing market in a number of towns I serve. The data comes directly from the Garden State Multiple Listing Service.  It’s always interesting to see the changes or progression in the local markets from month to month and it’s equally interesting to see the trends at the end of the year.

I have graphed selected data which makes the year end trends even more apparent.  Here are some of them and my conclusions based on the values:

Let’s start with the total number of residential listings that were on the market, month by month, for the 3 towns shown, in 2015: 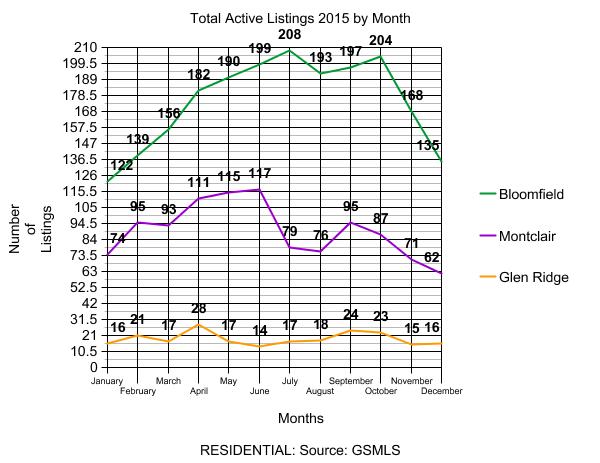 What the recession brought back to real estate was the notion of real estate seasons.  During the boom it was one big season from January to December.  Now, as a result of the normalization of the market, the traditional selling seasons are back:  January to Memorial Day and then Labor Day to Thanksgiving.

You can see the run up in listings coming on the market in Montclair and Bloomfield as spring approaches.  The numbers dip in the summer and then there’s a slight up-tick at the beginning of the autumn season and then a fall off at the end of the year.  Bloomfield will have more volume because it’s a bigger town.  Glen Ridge is constant but flat.  That doesn’t imply weakness in the Glen Ridge market as we’ll see in a minute.

What’s interesting are the numbers at the beginning and end of the year for all 3 towns.  They are almost identical.  This has been the case for just about every year since the recession ended.  This tells me we are in a consistent market in contrast to the heated market from 1996 to 2006 where every value, month to month and year to year, was constantly on the rise.

A quick look back at the 2014 numbers shows that the total actives for 2015 were virtually the same from month to month for Bloomfield and Montclair with Glen Ridge slightly down in volume in 2015.

Here are the total numbers of residential units sold in the 3 towns, month by month, for 2015: 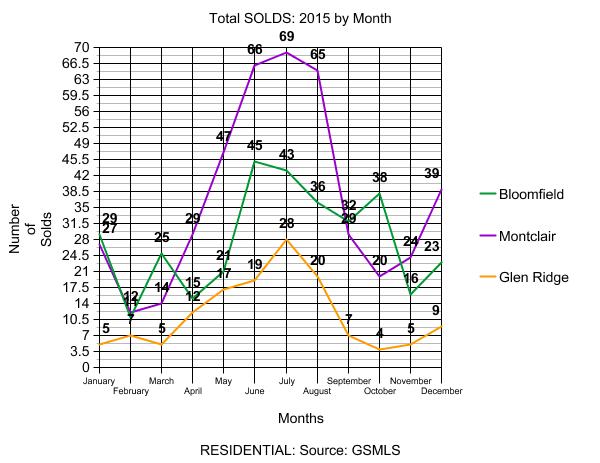 Next is the average days on market for residential sales in 2015: 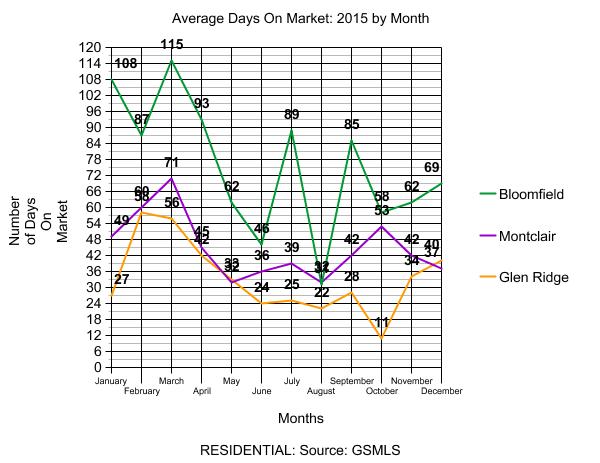 Bloomfield’s days on market mid year were volatile for some reason but the same trend of decreasing days on market toward spring is still apparent as is the case with Montclair and Glen Ridge.  Residential days on market have been decreasing, overall, for the last year or two showing the resurgence of a healthy market with seasonal trends.

Here are the average sales prices, by month, rounded to the nearest hundred thousand: 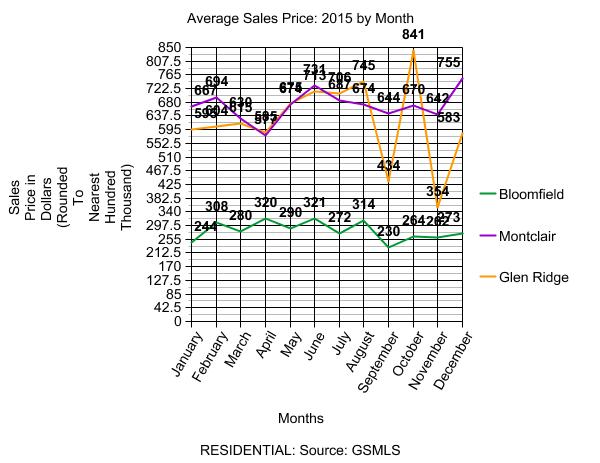 Glen Ridge’s numbers are skewed toward the end of the year by the lack of closings.  What’s also interesting is the similarity of prices in Montclair and Glen Ridge and the mirroring of trends in those two towns. There doesn’t seem to be any great seasonal increase in prices during 2015 although prices are on the rise, overall,  year over year in Montclair and Glen Ridge and are about the same in Bloomfield where, as you can see, prices are flat regardless of season.

Finally, here are the number of sold multi-family units for the same three towns in 2015: 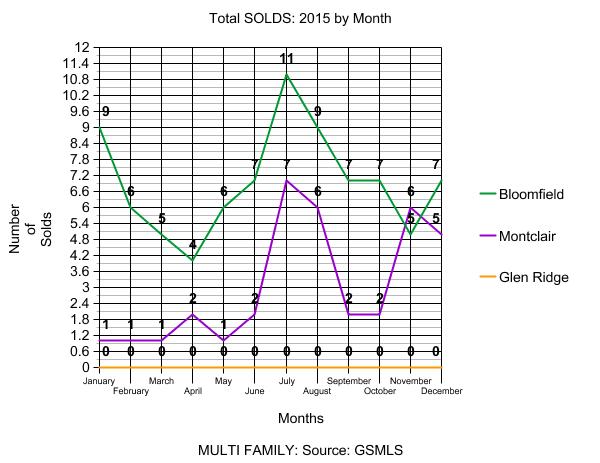 This is, obviously, a much smaller market with Glen Ridge not participating at all.  There are only a couple of streets in Glen Ridge which contain multi-family properties and they tend not to turn over year to year. Bloomfield is, by far, the most active multi market given the size of the township and the higher proportion of renters. All of Bloomfield’s multi data reflect this: number of units, number of solds and units under contract and smaller number of expireds. Again, in the overall multi data the seasons are back with Montclair finishing a little stronger than it started.  Prices are flat as they’ve been for the last few years:  We’re in a stable, slowly improving market, overall.  The consistency of the market within years and year over year is encouraging as the market shows normalcy.

The raw numbers show that Bloomfield, overall, has an absorption rate of 4.5 months with prices increasing about 3% during 2015 with sellers getting 99%-103% of what they ask.

Glen Ridge has an absorption rate of only 1.5 months with a small yearly appreciation of 2%-3% but sellers are getting 104%-112% of what they ask and prices, overall, in Glen Ridge are higher than either Montclair or Bloomfield which makes Glen Ridge the leading market in Essex County.

A normal market also shows that the advantage between buyers and sellers is equalizing, which has been a post-recession trend.  Some sellers see the improvement in the market as a return to the boom years when they were in control.  That is not necessarily the case given the unremarkable improvement in local markets over the post-rescession years.  Some buyers have not emerged from the recessionary mindset and are surprised when they have to compete for a property in these towns.  What makes these towns desirable: transportation, schools, ambiance, has not changed and these towns continue to be desired destinations whose appeal will increase as the market strengthens.  The market in these towns may be a bit stronger than other municipal NJ markets but, in general, though the numbers may be proportionally different, the trends are the same statewide with the exception of some markets in southern NJ which are not improving.

We are close to another periodic downturn in housing but, as has been widely predicted, the effect will be slight given the stabilization of the market. In the meantime, we continue to enjoy an anticipated, improving environment in the housing market.  2016 is predicted to be a year of continued improvement. Any interest rate increases will be slight and the US economy will continue to improve, adding more than 200,000 jobs per month.  Wages may not make dramatic gains but that is the new normal, a result of technology and globalization and less the result of recessionary forces.  The Federal Reserve will not exact any dramatic changes in 2016 since it’s an election year and the Fed doesn’t want its actions to be seen as political. If you evaluate these factors the conclusion is, again, an unremarkable but stabalizing environment.

Can’t get enough of my opinions?  Take heart.  I have another (non-real estate) blog called:

“The World At Large By Jim Stefanile: Thoughts On Everything Else”

I have written the history of my family.  You can visit the website at:

and scroll down to read the chapters in order or you can use the following links to jump to individual chapters.  I hope you can visit:

June’s post was Chapter 2, in the continuing history of my family:

July’s post was Chapter 3, in the continuing history of my family:

August’s post was Chapter 4: in the continuing history of my family:

September’s post was Chapter 5: in the continuing history of my family:

October’s post was Chapter 6: in the continuing history of my family:

November’s post was Chapter 7: in the continuing history of my family:

December’s post was, as it was the end of the year, fittingly, the last chapter in the history of my family, Chapter 8:

Related Articles
Market trends Whither The Market by James Stefanile, ABR, GRI, SRES, QSC, gCertified, REALTOR/Salesperson, Berkshire Hathaway Home Services New Jersey Properties, Montclair Office   Let’s take a look back year over year to get a sense of how the housing market is progressing: You will notice the number of closings has increased substantially in the last 5 years with only […]
Market trends The Market View – 2 Ways by James Stefanile, ABR, GRI, SRES, QSC, gCertified, REALTOR/Salesperson, Prudential New Jersey Properties, Montclair, NJ The following illustrations will give insight as to how the Essex County housing market fared for 2012 vs. 2013.  All information comes from the Garden State Multiple Listing Service. The first view is a line item report showing the listing […]
Uncategorized Real Issues in Real Estate Below you’ll find my take on timely topics and issues of concern to anyone involved in real estate, either as a consumer or professional.  Scroll down to see my latest postings.  You can also review past articles by clicking the “Review Recent Posts From This Blog”  or by searching the category links on the right side of […]