The following illustrations will give insight as to how the Essex County housing market fared for 2012 vs. 2013.  All information comes from the Garden State Multiple Listing Service.

The first view is a line item report showing the listing stats for the 2 years.  Click anywhere on the picture for a larger view: 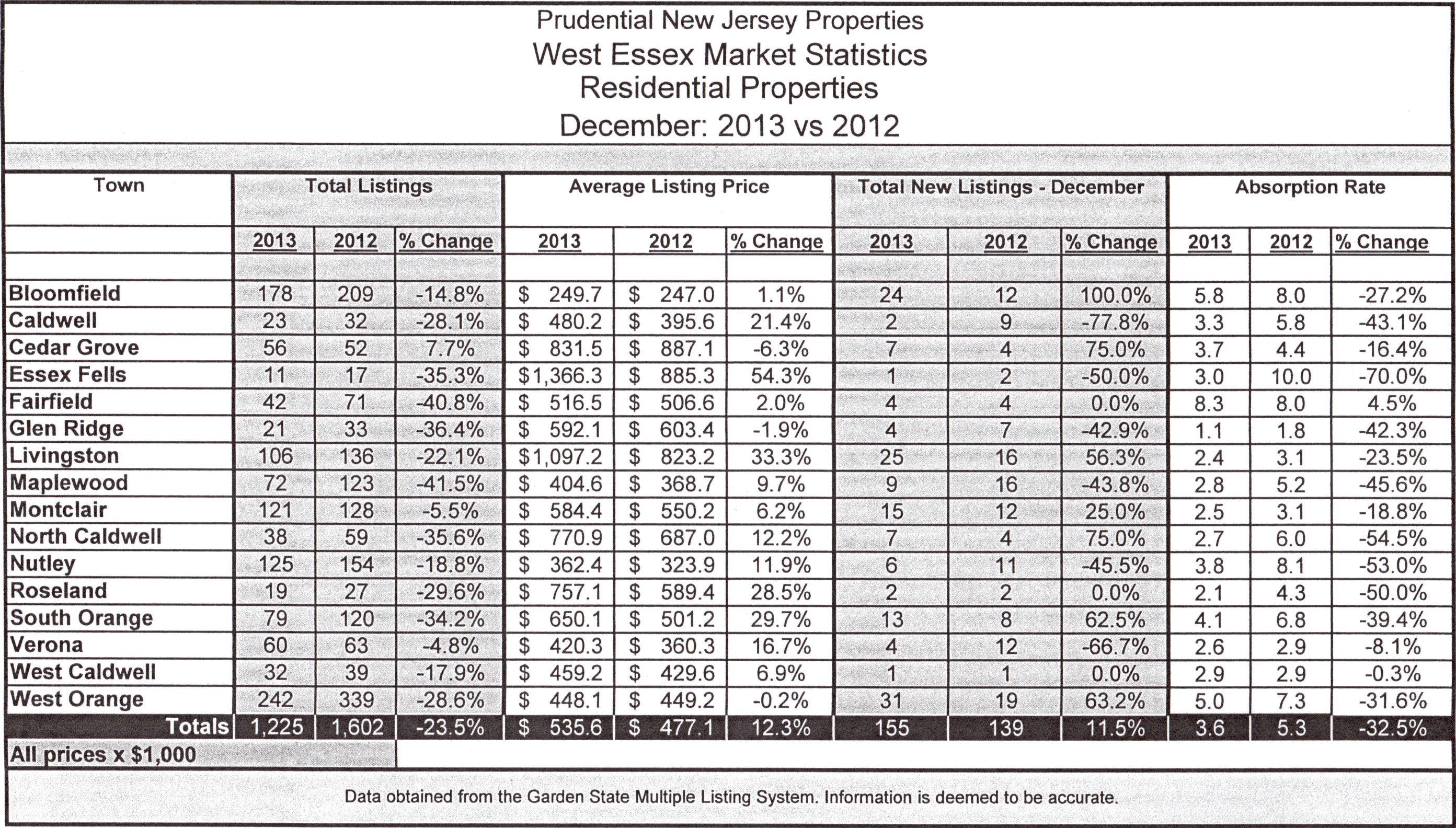 While the individual results vary from town to town, the overall averages point to an improved and more robust market.  Total listings are down (less inventory) in 2013, the average list price increased by an average of 12.3% reflecting renewed seller confidence and the absorption rate (the number of months it would take the market to absorb – sell –  the inventory for sale) fell by 32.5% to 3.6 months.  The last time we saw absorption rates that low was during the boom years which ended in 2006.

Here are the stats for number of closings, the average sale price, days on market (DOM) and the price ratio, or, what sellers got vs. what they asked: 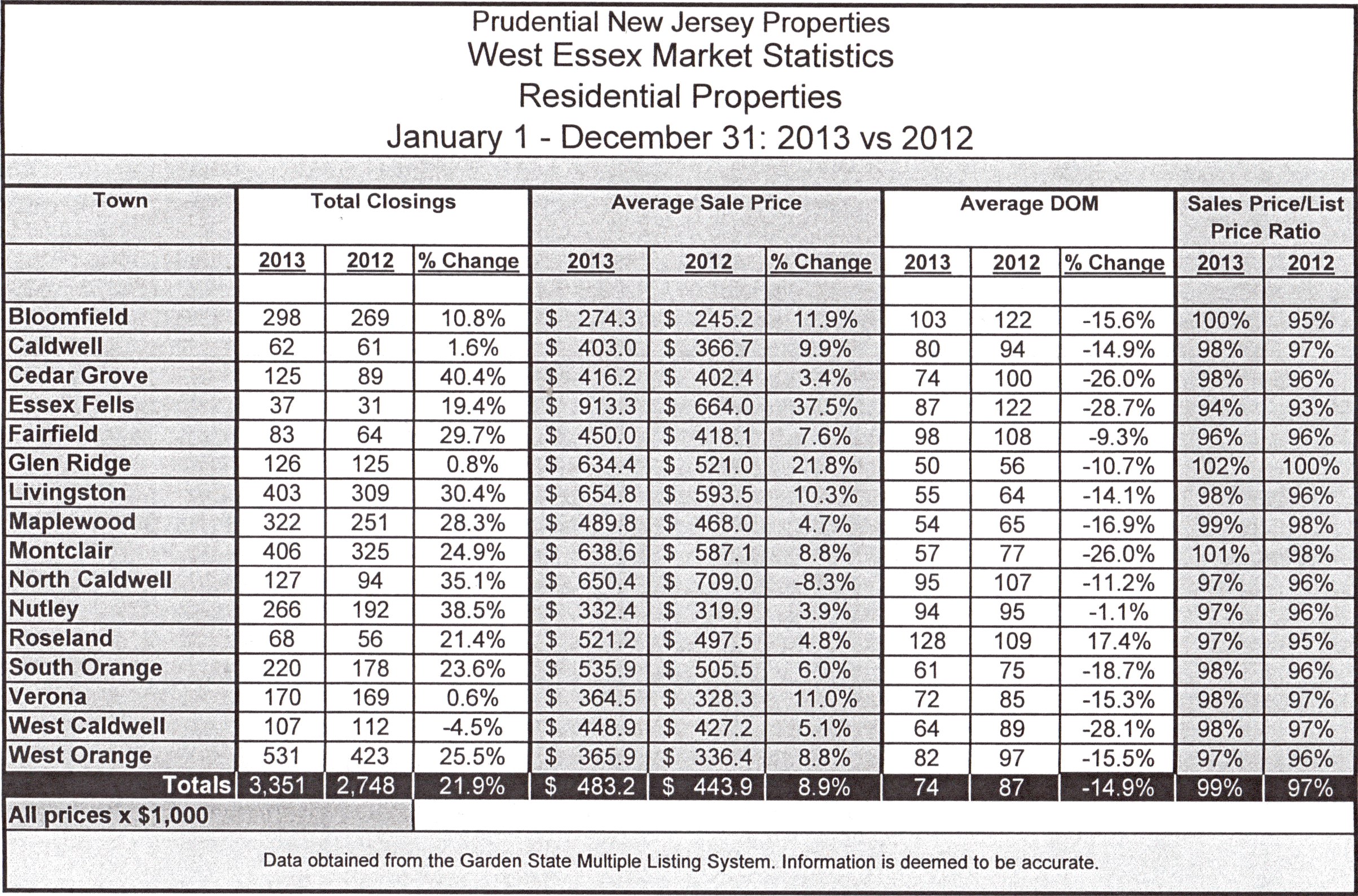 Again, 2013 was more robust compared to the previous year.  The total number of closings increased by 21.9%, the average days on market fell by 14.9% from 2012 and the average sales price increased, county-wide, by 8.9% – a substantial 1 year increase.  Sellers got 99% of what they asked on average as opposed to 97% in 2012.  Remember, we’re dealing with hundreds of thousands of dollars per transaction, so a 2 point increase represents real money.

Now let’s get the graphic view.  I track and graph the numbers for Montclair, Glen Ridge and Bloomfield.  This is interesting because it shows trends at a glance and, unlike the line item reports which only deal with end results, the graphs show how the market performed from month to month.  Here’s the average number of residential units for 2012 then 2013: 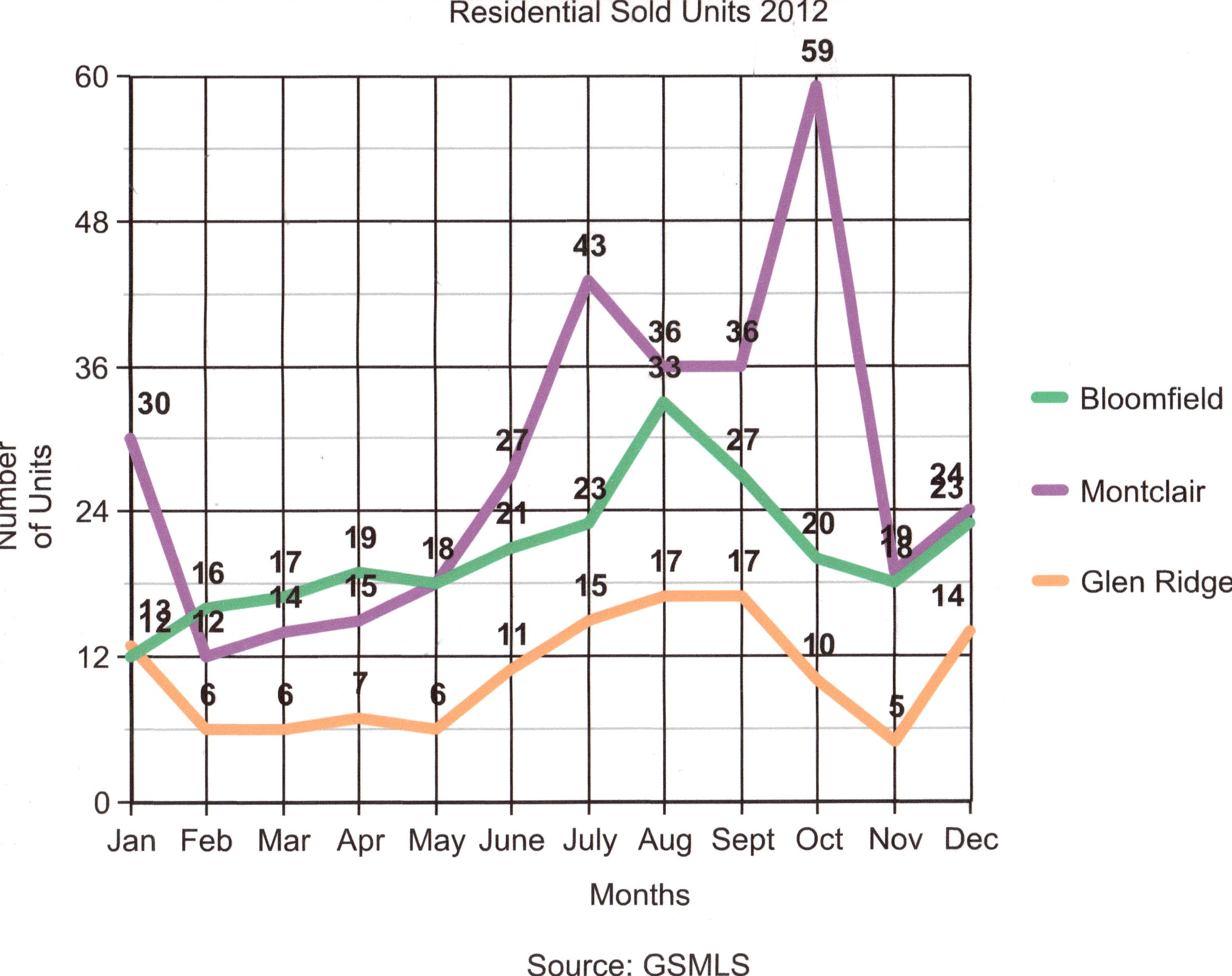 In 2012 the beginning of the year and the end of the year numbers were very similar, the peaks and valleys during the year notwithstanding.  You’ll also notice the seasonal increase and drop off of units for all three towns and the increases (except for Montclair in October 2012) are modest.  Now let’s look at the number of units sold for 2013: 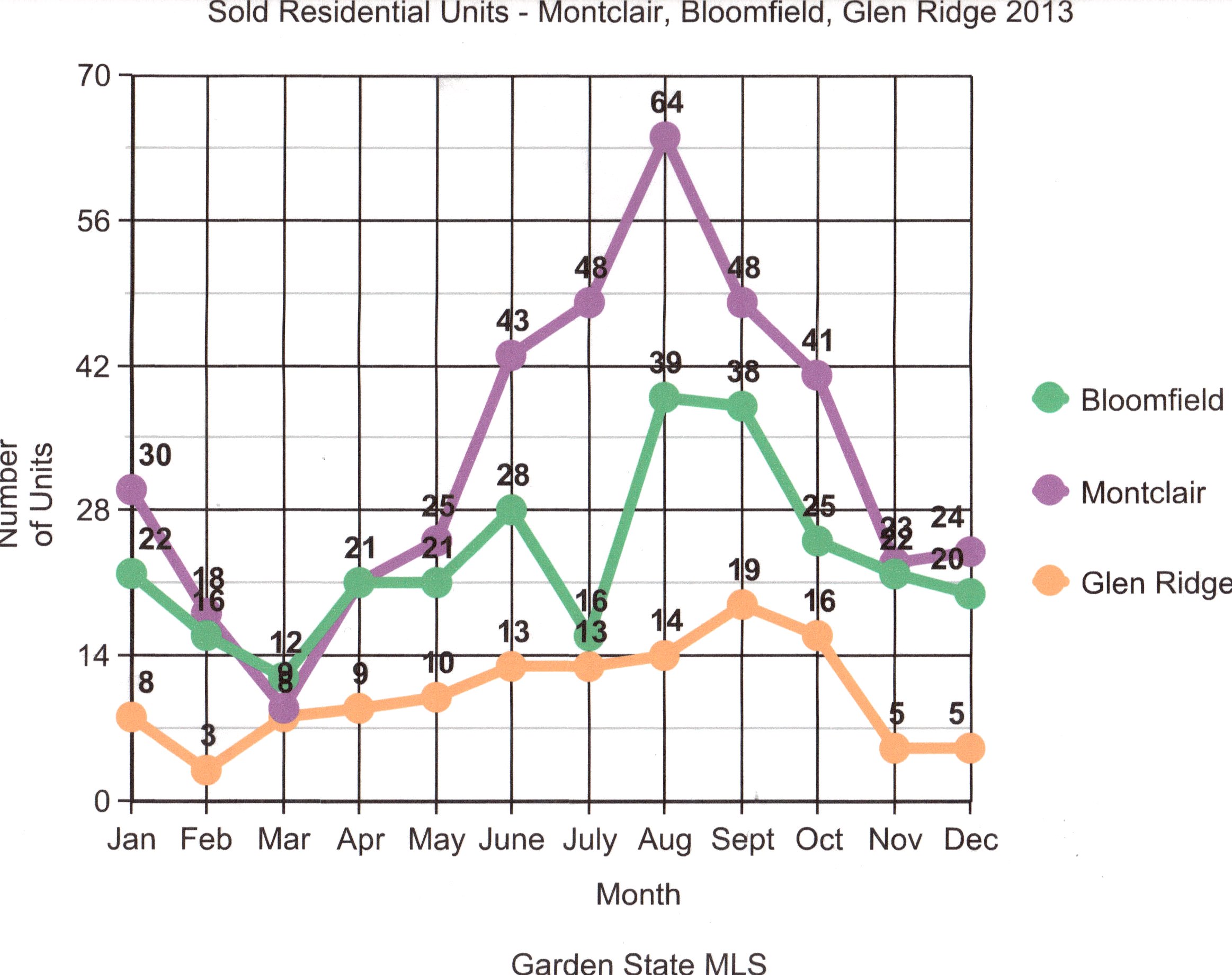 In 2013 the numbers are larger (although not dramatically so) and the increases are more pronounced and lasting until the inevitable drop off at the end of the year.  Here again, the beginning year and end year numbers are pretty much the same showing that 2013 was a market in recovery, not transition like 2012, but still improving and not at its peak.  The seasonal aspect of the market is very pronounced in both the number of units and prices, as you will see.  During the boom years the graph lines just went up, up, up with not seasonal adjustments.  The real estate seasons are back which is more normal.  Now, let’s see how prices fared from 2012 to 2013: 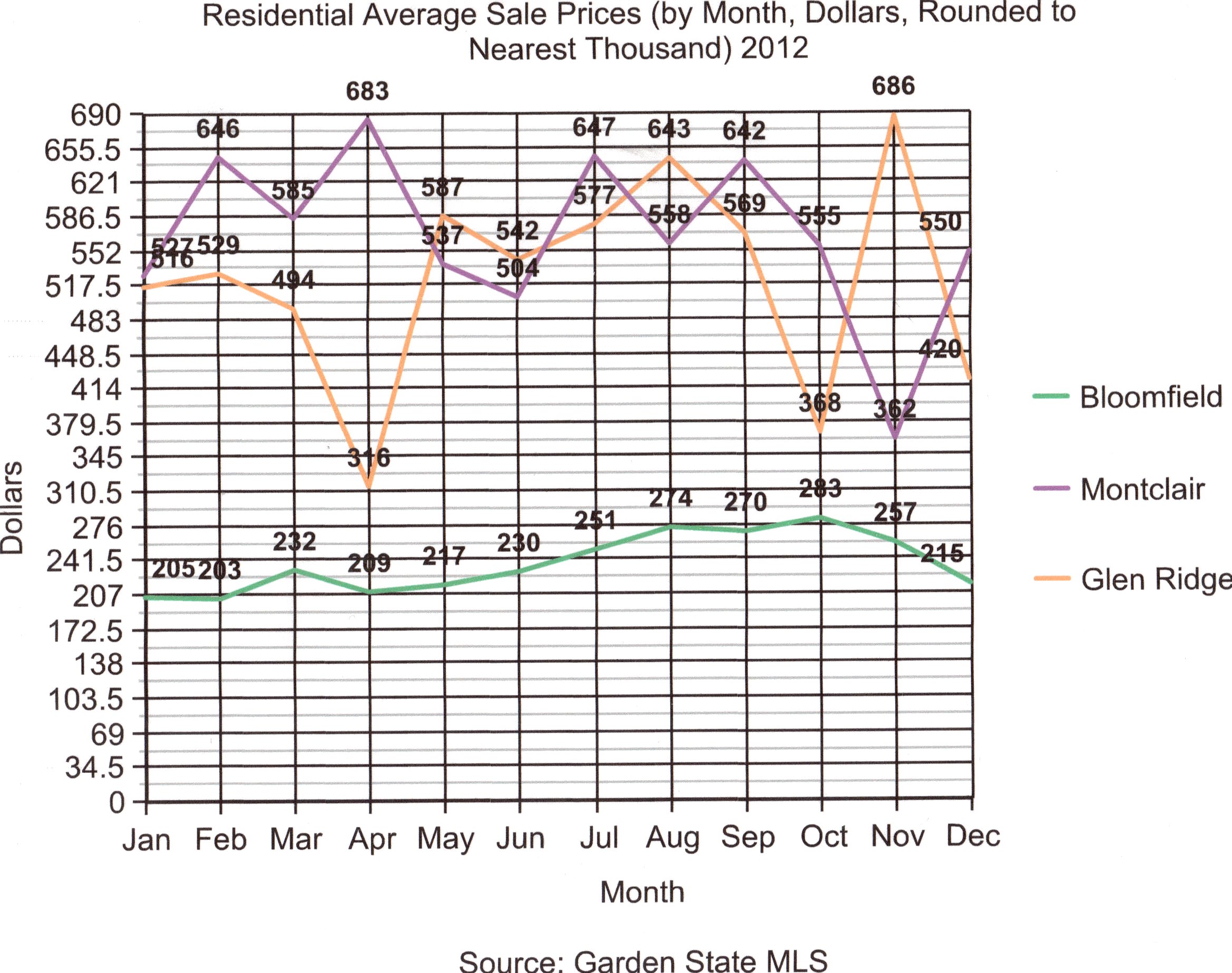 The 2012 prices are erratic with peaks punctuated by dips in prices as the market made its transition.  Again, prices in January were pretty close to prices in December.  Now, 2013: 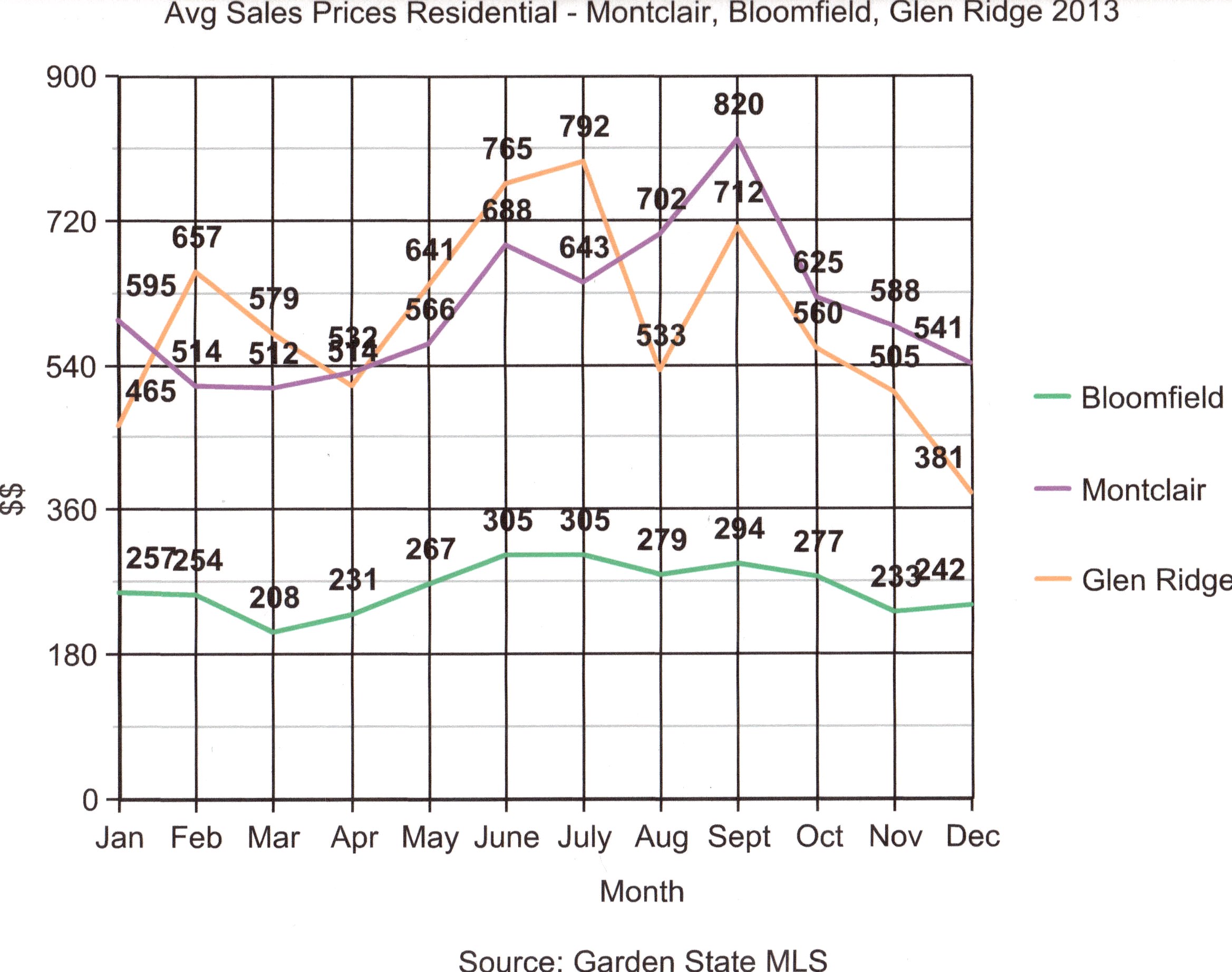 The peaks are more sustainable and the numbers are bigger, sometimes significantly so.  Seasonal prices are evident and the end of year lines still sink down to where they were at the beginning of the year.  Glen Ridge, interestingly enough, exhibits an almost identical trend line with slightly bigger numbers for 2013 over 2012.

The conclusions are that the market is definitely on the upswing and strengthening year over year.  All the pundits point to increases until 2016 or 2017 when the next down cycle will occur.  Remember, the real estate market for the past 50 years or so has been a wave of 5 years up and 5 years down with the exception of the 10 year rise from 1996 to 2006 which was an anomaly.  Therefore, we can expect another dip at the end of this 5 year cycle which started increasing in 2012.  The soothsayers are also saying the corrective dip at the end of our current cycle will be mild.

The advantage between buyers and sellers has evened out with neither having the sole upper hand.  As long as credit continues to flow we should see a market that will benefit all its participants for the next few years.