The Wait Is Over

Let’s take it by the numbers.

I’ll show you, with raw market data, that prices are AT THE BOTTOM in our marketplace.  There’s little point in waiting any longer for prices to drop .  You’ll see comparisons from 2011 to 2010 that will prove we are at the beginning of the upswing in real estate values.  If you look at real estate for the last 50 years in the US you’ll see 5 year cycles of boom and bust.  We had an artificially elongated boom cycle from 1996 to 2006 because of 9/11.  The loosening of regulations that resulted from the government panic brought on by that tragedy gave us another 5 years of boom.  The market should have deflated in 2001.  Instead, it did so in 2006.

Most people think the “bubble” burst at the end of 2008 with the overall financial crisis in the US.  Actually, if you tracked the numbers, town by town, in the market every month (which I’ve been doing in my market area for the last 10 years) you would have seen prices slipping during 2006, the amount of inventory rising and the differences between asking and selling prices moving downward.  Those trends continued during the period 2006-2008 and the financial crisis made it more obvious and accelerated the downward spiral.  It’s a very clear 5 year cycle: 2006 to 2011 and, now, as you’ll see, the real estate market has been improving for the last year – not dramatically and there’s still lots of distressed properties weighing on prices – but improving nonetheless. 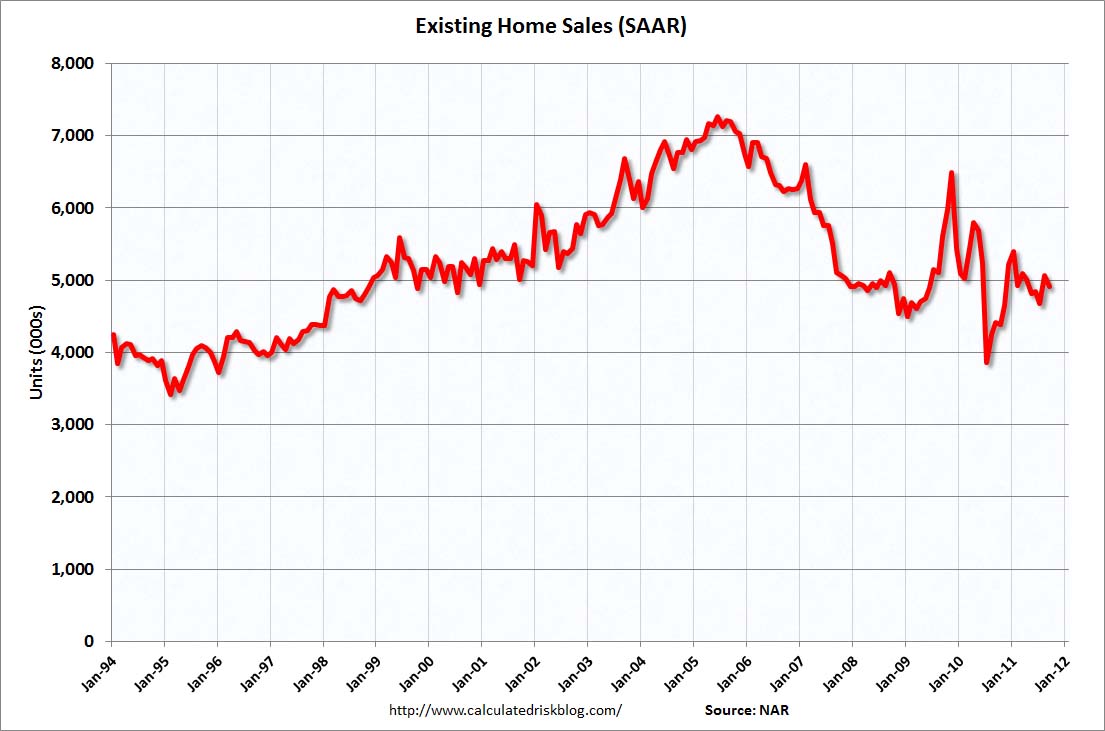 The graph at left shows existing home sales for from the National Association of Realtors (NAR). It shows a very clear upswing lasting from 1996 to 2006.  It also shows the very clear dip beginning in 2006 and the beginning of another upswing now.  The consensus of this graph is for sales of 4.80 million at a Seasonally Adjusted Annual Rate (SAAR) for late 2011.  If you click on the graph you’ll see a more readable full-sized version.

I understand that different parts of the country are performing differently.  On February 1st there was an article in The New York Times about the Atlanta, Georgia market which is still experiencing a depressed downward slide in prices.  There are other hot spots (cold spots?) in the country like Las Vegas and Phoenix where their lofty highs in real estate made them the first to fall and the hardest to recover.   The figures I’m going to present are for Essex County, NJ.  This data is from the Garden State Multiple Listing Service.  It’s not conjecture.  Let’s see the numbers:

This is a comparison of average sales prices for all of 2010 vs. all of 2011.  You’ll notice Caldwell, Glen Ridge, Montclair and North Caldwell all had IMPROVING prices year to year.  Cedar Grove, Essex Fells, Nutley, Roseland, Verona, West Orange and West Caldwell had drops, but not by much, some less than 1%. certainly not the town by town 10% to 15% drop in prices we’ve seen year to year over the last few years.  Only Bloomfield, Fairfield and Livingston did not fare well.  Bloomfield has a lot of diverse neighborhoods from upscale suburban to heavily urban which translate into lackluster overall performance.  Fairfield and Livingston are slow markets, even in the best of times.  The overall year to year price comparison was a loss of 3.63%.  I regard this small number as a sign of stability.  It’s well below the recent average 6% to 7% declines.  It’s certainly not the gloom and doom we hear every day in the media.  Even in The New York Times – which I believe hates real estate based on its coverage – there have been stories of improving consumer confidence, rising numbers in new construction of housing and glimmers of hope in real estate in general.  As lately as January 21st The Times Business Section ran a Reuters piece called “Markets End Day With Slim Gains”  where it was said, “In economic news in the United States, home sales hit an 11-month high in December and the number of properties on the market was the fewest in nearly seven years, pointing to a nascent recovery in the housing sector. The National Association of Realtors said on Friday [January 20th] that existing-home sales increased 5 percent to an annual rate of 4.61 million units, with all four of the nation’s regions recording gains. Sales of both multifamily and single-family homes rose…There were 2.38 million unsold homes on the market last month, the fewest since March 2005.  That represented a 6.2-month supply at December’s sales pace, the lowest since April 2006 and down from a 7.2-month supply in November.” (Copyright 2012, The New York Times and Reuters).

Don’t forget, markets are partly psychological.  When more people feel good about purchasing homes, an improving market becomes a self-fulfilling prophesy.  The market will improve, and is doing so now, based partly on the positive perception we’re beginning to see in the media.  When you consider, also, that whatever you see or read in the media about real estate has already happened, you see that the confident trend is not just starting but is well under way.

Let’s read our next set of tea leaves:

The numbers of closed sales between 2010 and 2011 are an obvious sign of improvement.  Most towns had more sales or an almost identical number and even in the slowest town markets, where there were less sales, the difference was slight.  This is not dramatic improvement, as I said before, but it’s no longer a downward trend.  Think of the market cycles like a roller-coaster (and there has never been a more apt comparison).  The car shoots downward to the bottom of a curve and then slows, stops and begins to slowly ascend the next curve.  These numbers of sold units show the roller-coaster car slowing at the bottom and beginning, slowly, to trudge up the other side.  I believe the sales prices in the previous graphic show the same thing.

Here are some more telling numbers:

The DOM or days on market numbers are about the same or a little higher in 2011 which can be a continuing reflection of consumer reluctance and non-awareness of  the continuing improvement in the  market or the fact that there has been more protracted negotiation in housing sales.  The significant issue is the number of listings on the market.  For the most part, these numbers are shown to be in decline or virtually the same.  Over the last few years the number of listings on the market has steadily increased, inflating the overall inventory and increasing the time it would take for that inventory to be absorbed through sales and putting more pressure on price.  Now there’s a sign of stability and decrease in those numbers which will bring down the absorption rate and will be another factor contributing to the stability and, then, rise in prices.

Here’s my favorite set of stats:

This is the percentage of what sellers got in sale price in 2011 vs. what they asked in listing price.  In fairness, these percentages may reflect the final sales price as compared to a price reduction.  There’s no way to ascertain how much of a factor price reductions play in these percentages.  It’s also unlikely that every sale used in these averages had a price reduction.  That aside, no town’s sellers got less than 95% of what they asked, even in the worst performing markets.  The overachiever, Glen Ridge, had a whopping 99%.  In the good old days we’d see lots of numbers in the 100% to 105% range in the best towns.  What’s interesting, however, is that underperforming towns could be in the 75% to 85% range in the best of times and now are joining their better performing brothers and sisters in the mid 90’s.  This, to me, is a sign of overall strength where all results are about the same.

If you want to see results on a national basis go to: http://www.realtor.org/wps/wcm/connect/b810d08049dae5a8972adf7393f1335d/RELEHS.pdf?MOD=AJPERES&CACHEID=b810d08049dae5a8972adf7393f1335d where the National Association of Realtors has published a chart of existing home sales and sale prices since 2009 with a detailed recap of the last year.   All the results for numbers of units are in the plus column with the exception of the Midwest and the sales prices, while showing declines, are no more than 3.2%, except, again, in the unfortunate midwest.

Well, there you have it.  If your butt is sore from sitting on that fence maybe it’s time to jump off and get on with your hopes and dreams.  There has never been a better time to be a housing consumer and there may never be a better time if these trends continue resulting in higher prices and less inventory.  Certainly this trend can be halted or reversed with some political, financial or natural disaster but assuming normal conditions (normal being current conditions) there’s no reason to believe this improvement won’t continue.  We’re not falling anymore so time spent waiting is time spent watching your purchasing power decrease.  You may think you’ll wait another 6 months and maybe prices will fall another 1% to 2%.  I don’t believe that will happen, over all, and, in 6 months, when everyone is finally convinced that we’re at the bottom, there will be more competition for less inventory.  Competition always means higher prices which can negate any falling prices, assuming those decreases occur in the first place.  Also, I hope mortgage rates stay low forever but, normally, improvements in the economic picture lead to higher rates.  Mortgage money is available for well qualified buyers and has not been this cheap for 60 years.  There are even reports that lenders are loosening their underwriting standards in order to lend more.

As is the case with most trends of this nature, we don’t become fully aware of them until they have matured and burst into view.  Wouldn’t it be smarter to take the knowledge these statistics provide and act before the herd gets wise and tramples this opportunity?

Related Articles
Uncategorized Dubious Duo   by James Stefanile, ABR, GRI, SRES, QSC, gCertified, REALTOR/Salesperson, Berkshire Hathaway Home Services New Jersey Properties, Montclair Office REALTOR.com has introduced a partnership with Airbnb, the home sharing and vacation booking website. The rationale for this affiliation, according to REALTOR.com, is so that prospective home buyers can “try before you buy” by actually living […]
Eminent Domain New Idea, Old Objections by James Stefanile, ABR, GRI, SRES, QSC, gCertified, Salesperson/REALTOR, Prudential NJ Properties, Montclair, NJ The Federal Government’s programs to assist financially distressed homeowners have not performed up to expectations and have helped only a limited few.  Congress would not authorize bankruptcy judges to modify distressed mortgages by court order in order to assist homeowners in […]
Business Expenses A Hand In My Pocket by James Stefanile, ABR, GRI, SRES, QSC, REALTOR/Associate, Prudential NJ Properties I don’t like to write about money because I tend to get whiney when the subject comes up but I’ve been doing some math lately and, as Mr. Spock would say, “The figures are taking an alarming direction…” I was thinking about how much it […]