On September 24th I attended a Prudential NJ Properties’ company-wide webcast including all 20+ offices and 500+ agents in the company.  The webcast was the launch of my company’s relationship with Matthew Ferrara’s Learning Network.  He’s yet another real estate training guru (I’ve never seen an industry with so many) who broadcasts seminars over the web to clients. 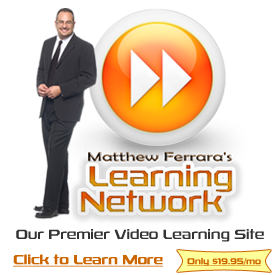 Click the image for one of Matthew Ferrara's videos

I had no objection.  One of the aspects of this relationship with Ferrara and my company was that we would all get free access to the Learning Networks seminars, webcasts and archives – a very generous gift from Prudential NJ Properties since an individual yearly subscription to Matthew Ferrara’s Learning Network is well over $200.

I am notorious among my colleagues for falling asleep during long meetings and presentations and this webcast was going to be from 9:30 am to NOON!  I got a good night’s sleep and had 2 cups of coffee (as opposed to my usual none) from the breakfast spread my office manager generously provided.  I was ready for a wide-eyed occasion but my expectation was for pretty much more of the same kind of training I’ve experienced for the last 10 years.  I had seen some of his seminars on social media (the hot topic of all real estate trainers).  He was interesting but I thought I’d have a merely mildly informative morning in Montclair.

What I experienced was Matthew Ferrara who talked for 2+ hours with, seemingly, no notes and was consistently more than interesting – he was compelling – and started me thinking about the broader implications of his topic.

His core message that day was the different generations of customers we, as REALTORS, deal with, their unique attributes and what works in an evolving real estate environment and what doesn’t.  Don’t worry – this isn’t going to be an article about that.  First of all, I won’t bore you with this industry palaver and, second, I won’t give away these secrets so you won’t see them coming when we meet (only kidding).

What struck me most was that my USA is getting older and someone else’s USA is just emerging.  This is nothing new, of course.  Generations emerge and replace older ones and have been doing this ever since that fish crawled out of the ocean and decided to take a walk.  What’s compelling is the characteristics of the older and newer generations and the differences between them.  I am a firm believer that our physical evolution as a species may not present anything new in the foreseeable future but that our social evolution has overtaken all other processes and is the distinguishing mark of our progress as a species.  What Matthew Ferrara talked about on September 24th really brought this home to me.

Ever since Americans started moving out of the farmland in large numbers in the 19th century the differences among generations has been more striking than anything that came before.  Gum chewers and pool players were once regarding as shockingly devolved.  As other generations emerged the flappers, rockers, beatniks, feminists, hippies, goths, emos, geeks and other variations on human behavior caught attention, all new, all striking fear into the generations already established.

As Ferrara pointed out, right now we have the Seniors (my parents’ generation), the Boomers (yours truly), Generation X (born between 1961 and 1981) and Generation Y (my daughter’s generation, born between 1982 and 1995).  He goes on to expand on the Seniors “word is my bond” characteristic.  Do you see much of that these days?  Sadly, no.  I’m not sure we’ve evolved so positively on that one.  Then there’s my bunch – raised by parents who survived The Great Depression and World War II – we’re former hippies.  We’ve loosened up our parents morals but we still don’t run with scissors and we always keep an umbrella nearby.  I used to go home for lunch every day during elementary school and my mom had comfort food waiting.  Technology was crude or non-existent in our formative years compared to its prevalence today.  We use technology but, perhaps, without a certain fluency.

Generation X was the generation where technology became normal, a part of everyday life.  These were “latch key kids”.  No one was home when they got back from school so they were totally in charge of their time.  They are still in control and their embrace of technology has made them competitive and demanding of information, not opinions.  They invented the Kelly Blue Book and Consumer Reports.  They are individual, in charge and self-described as awesome.

Generation Y is twice as big as Generation X (take a bow, Boomers) and they are also a bigger boom than the Boomers.  They are so connected via technology that they have the characteristics of a collective, a hive.  They don’t intend to settle into a job or community for life and they are frighteningly smarter than everyone who’s come before.

I don’t mean to pigeon-hole anyone.  I am more fluent in technology than my daughter (who’s a proud retro-hippie) but I see the hive mentality in her more than me.  There are, obviously, exceptions and variations on the generational characteristics but, over all, I believe what Ferrara said to be largely true.  It focused me on the way the world is evolving right now.

In antiquity, the emphasis was on political formation and community development.  The Medieval period featured the development (and perversion, some think) of religion and state in Europe and the refinement of civilizations of the East.  All of these periods were blood soaked as political, economic and religious differences were often settled by war (we haven’t come that far in this regard, either) but trading and commerce did evolve, sometimes peacefully.  The Renaissance brought human intellectual and social evolution to new heights of art and invention.  This was followed by the period of Empire in Europe, the expansion of urban humanity to the continents to the west of Europe, the full engagement of Eastern civilizations with the European and the subversion and exploitation of indigenous populations.  Humanity started to engage fully with its separated constituencies, the beginning of our contemporary global marketplace.

Through the revolutions and upheavals that led to the political planet we now inhabit, technology, business, monetary systems and social mores all evolved alongside the communal.  This evolution became more sophisticated as the need for heat, hearth and food became less intense by its availability.  The Industrial Revolution removed some of the fundamental deficiencies of the agrarian lifestyle as technology replaced a strong back and a shovel.

I’m sure I’ve missed a few important developments in this brief history of the world but you get the point.  We haven’t grown past some of the evolutionary physical deficiencies we possess – for example, our throat structure allows for intelligent speech but its narrowness leads to choking more often than any other mammal.  How about heartburn?  That system doesn’t seem too well thought out.  And speak to any OBGYN and they’ll tell you that’s a system that needs refinement.  We have, on the other hand, evolved, spectacularly, socially and technologically.  These younger generations that Matthew Ferrara described are far ahead of where I was at their age.  If they feel special and entitled – they’re right and the rest of us need to tip our hats to them and feel good about where we’re going as we evolve together.